Sun Valley Area Neighborhood Council: 2018 EmpowerLA Award winner for the North Valley
When the La Tuna Canyon fire raged through the Northeast San Fernando Valley, SVANC was called upon by the LAFD Captain of Fire Station #77 to help rally community support and donations for the brave women and men fighting the fire. In response to SVANC’s outreach efforts, drinking water, food, snacks, and ice were contributed by SVANC, their stakeholders, and local businesses. These things were shared with over 700 firefighters returning fatigued from the lines with parched throats, who were able to refresh themselves before getting some sleep on the hundreds of fresh pillows that had been donated for their use. The La Tuna Canyon Fire burned about 7200 acres, but SVANC’s dedication and empathetic response to this emergency helped make a great difference to their community.

Foothill Trails District
In March 2017, FTDNC hosted a candidate mixer at the Angeles National Golf Course, and invited all candidates who qualified for the ballot for Council District 7. FTDNC also hosted the only candidate form for the LAUSD board seat in the region. The mixer, which was attended by about 250 people, was the first event in which all the candidates were able to participate together. Using a mixer format for the event allowed interested voters to meet one-on-one with any candidate(s) they chose, and ask the questions they were most interested in.

Northridge East
On February 15, 2017, Northridge East sponsored a Mayoral Candidate Forum in which 9 of the 11 candidates participated. Each candidate made an opening statement and answered questions from the audience. The event was covered by media outlets like the Daily News, who published two articles about the forum.
On May 18, 2017, Northridge East co-sponsored a productive Traffic and Pedestrian Safety Forum, focused on improving student and community safety along the Zelzah Avenue corridor adjacent to Cal State Northridge. To put on the forum, NENC partnered with the Friends of Northridge Academy High School.
Northridge East has also done several things to increase attendance at and participation in their meetings. They actively worked to increase their number of subscribers with the City’s Early Notification System and had 550 subscribers as of the last report, which is the second highest number of subscribers of all Neighborhood Councils. Besides promoting their meetings on social media and in newsletters, NENC also places a monthly quarter-page ad listing the time and key issues for their next meeting in local newspaper the Community Connection, which is mailed to every household in Northridge.

Northridge West
NWNC held a town hall in response to multiple stakeholder requests for action regarding a local sober living facility that had recently opened within 600 feet of a nearby school. The event was conducted in partnership with Northridge East, Northridge South, and North Hills West. Speakers included local LAPD Senior Lead Officers, Councilmember Mitchell Englander, and Assistant City Attorney BIll Larson. One unexpected result of the town hall was that three people, who were impressed with NWNC’s ability to listen to the community, joined the Northridge West board.

Panorama City partnered with two other Neighborhood Councils – North Hills East and North Hills West – to sponsor and promote a CERT 1 class. These three Councils serve an area of the Valley that has many Spanish-speaking families, so they joined forces to plan and recruit volunteers for CERT classes that would be taught in both English and Spanish. The English class has graduated (with perfect attendance) and the Spanish class will begin soon. The Spanish class will be an innovative partnership between the LA Fire Department and a newly-trained Sergeant from the LAPD’s Mission Division.

These three Councils also collaborated with the Southern California Preparedness Foundation to provide emergency supply-filled backpacks to graduates from the CERT classes. However, backpacks and training were not all that the students got from their experience. A PCNC boardmember taking the class talked to classmates about what Neighborhood Councils were, and what they did. As a result, one student actually wound up joining the PCNC board!

Sunland-Tujunga
The STNC Outreach Committee planned and executed a candidate forum and a debate for the CD7 City Council election. To accommodate the unusually large field of 20 candidates, STNC used questions submitted by stakeholders to create a 20 Questions for 20 Candidates Survey. Each candidate created a cellphone video which was posted, along with their survey responses, on STNC’s CD7 Elections page. That page was then shared in outlets like the Daily News to promote the candidate forum, which was attended by 19 of the 20 candidates. STNC then hosted a debate between the two candidates who made the run-off. 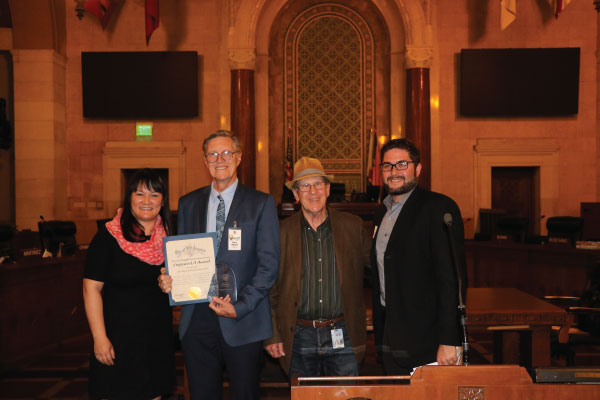