The Valley Alliance of Neighborhood Councils (VANC) celebrated their 15-year anniversary last night with their annual “Best of” Awards, which honors the great work of the 34 Neighborhood Councils in the Valley.  With a video welcome from LA Mayor Eric Garcetti, who was in New York at his college reunion, and City and State elected officials and City department heads like Councilmembers Paul Krekorian, Mitch Englander and Bob Blumenfield and Board of Public Works President Kevin James in attendance, the evening was festive with a standing room only capacity.

Congratulations to the VANC for achieving 15 great years, and to the winners of this year’s “Best of the Valley” Awards! Read about the amazing work of this year’s VANC Award winners below, and check out the event photos by Saul Daniels.

“Best of… Community Engagement in a diverse variety of projects” 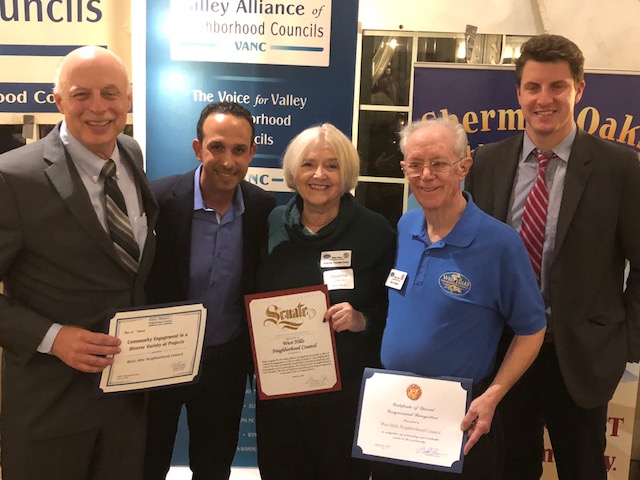 The Council organized a series of public forums on crime and public safety featuring the LAPD and professors from CSUN’s new Criminology and Justice Studies Department. The most recent forum, “Surviving an Active Shooter Event,” was the most successful yet, with more than 170 attendees. Future forums will focus on scams affecting the elderly, identity theft and domestic violence.

The Council’s Homelessness Committee has led many initiatives, including gatherings of social action leaders from different faith groups and a recent tour of a permanent supportive housing facility in Winnetka. West Hills’ participation in the Greater L.A. Homeless Count was a flawless, beautifully organized event that attracted volunteers from Porter Ranch, Chatsworth, Canoga Park, Woodland Hills, and other communities. The Homelessness Committee also has shepherded many Community Impact Statements through the Board on the issue.

The monthly Community Cleanups bring West Hills Neighborhood Council Board members together with school, church and Scout groups, as well as the public to clear weeds, pick up trash and upgrade our schools. These events are a model for other communities, sometimes drawing as many as 40 volunteers.

Every November, our Beautification Committee partners with the Church at Rocky Peak to fix up schools, clear weeds and perform other projects in West Hills. This year, one of the projects was repainting fire hydrants. The committee prepared a brochure asking residents to keep their perimeter walls and pedestrian walkways clear of weeds and overhanging growth.

The Streets & Transportation Committee worked with representatives of Metro to resolve a dangerous situation where buses on layover have been blocking the view of drivers entering and leaving the Platt Village shopping center. As a result of the Council’s negotiations, the City is repaving the entire sidewalk along the shopping center to allow buses to park in places that don’t create a hazard. The Committee is also preparing a major initiative to support Vision Zero that includes a bike rodeo, bike repairs and giveaways, bus bench ads, display of an LAPD “crash car” and other educational programs.

The Communications & Outreach Committee has developed “booths in a box” containing tablecloths, brochures, pamphlets, shopping bags and other giveaway items, making it easier to set up display tables where ever it is needed. In addition, our West Hills Community Calendar is sent weekly to our mailing list and posted on our website. This super-comprehensive 10-day calendar of local events alerts our community to events of general interest in West Hills and its environs, including all committee meetings and events of the neighborhood council.

The Zoning & Planning Committee continues as a model for thoughtful and detailed review of all planning requests affecting the community. Its meetings are exceptionally well attended by the public and by members of the West Hills Neighborhood Council Board members. 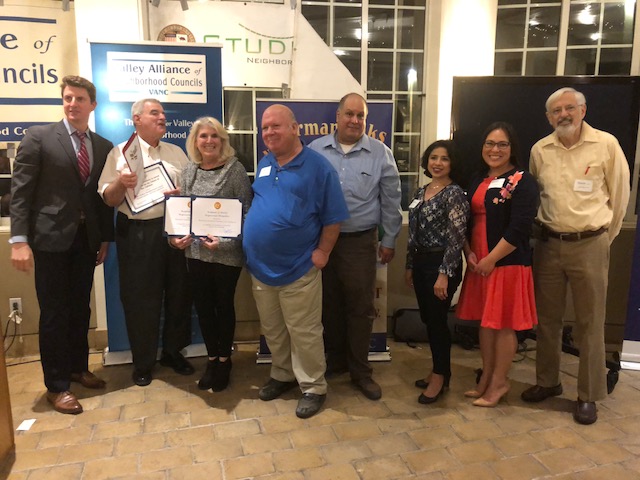 “Best of…Working Collaboratively to invest in education for the future of our children” – Lake Balboa Neighborhood Council – Education and Recreation & Parks Committees When Lake Balboa Neighborhood Council board members were told that their stakeholders were going to move so they could send their children to “good” public schools, Lake Balboa NC created an Education Committee and tasked itself to find out if these poor ratings were an accurate reflection of the education provided at local schools.  Committee members met with LAUSD Superintendent Michelle King,  District Superintendent Vivian Ekchian, and LAUSD Board Member Scott Schmerelson, attended LAUSD School Site Council Meetings and Coffee with the Principal meetings. The Committee  learned that TWO, Lake Balboa schools (Bassett Elementary and Mulholland Middle School Robotics Magnet) won VEX STATE Championships in March 2017 and were advanced to the VEX WORLD Championship tournament in Kentucky.

To build upon the momentum for encouraging students to participate in activities that increase skills related to Science, Technology, Engineering and Mathematics (STEM), the Council voted to grant Bassett Street and Lemay Street Elementary schools, twelve additional robot kits each, along with field perimeters and additional game elements to expand their robotics programs.

To increase community involvement and help promote the schools, the Council invited the schools to attend their “Movie in the Park” at Louise Park. The championship teams showcased their award-winning robots and spoke about their schools’ unique programs. Lake Balboa stakeholders were immediately drawn to the robots and were interested in learning more about the schools and their robotics programs.

Robotics stood out as a clear way to capture the attention of the budding elementary students in a fun and exciting way while continuing to build upon their STEM skills. The Council voted additional funds for Robot kits for Gault Street Elementary school.

In addition, the Council purchased 20 chess sets for each school to build upon logic and reasoning skills for students who didn’t make the robotics team, or were too young to be on the team. The schools have started their afterschool chess clubs.  Assembly member Adrin Nazarian started playing chess when he was 4 years-old and attributes his strategic thinking and planning to chess. He promotes a yearly high school chess tournament in Lake Balboa and has agreed to include Lake Balboa’s elementary schools students on May 12th. this year.

Lake Balboa voted funds for the Rec. and Parks committee to purchase and install four permanent chess tables at Lake Balboa for all to enjoy. The tables will be installed this spring. 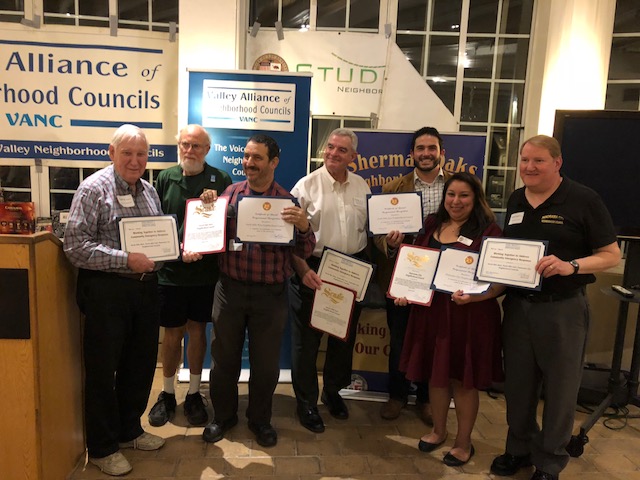 Three Neighborhood Councils serve an area of the Valley that has many Spanish-speaking families.  They partnered to plan and recruit volunteers for CERT classes that would be taught in both English and Spanish.  The English class has graduated (with perfect attendance) and the Spanish class will begin soon.  The Spanish class will be an innovative partnership between the LA Fire Department and a newly trained Sergeant from the LA Police Department’s Mission Division.

The Fire Department no longer has funds to provide graduates with a “CERT kit” to hold their emergency equipment.  These three Neighborhood Councils worked with a non-profit organization, the Southern California Preparedness Foundation, to pool funds to provide these CERT kits to benefit their communities.  The Foundation, which sponsors the annual Valley Disaster Preparedness Fair, obtained a grant from the Southern California Gas Company.  This grant was used to match City funds provided by the three Neighborhood Councils through Neighborhood Purposes Grants.  CERT kits have been distributed to the English class graduates and the kits for the upcoming Spanish class have been reserved.

“Best of… Award for Outreach Efforts Producing a Job Fair, a Health Fair, and Publishing an Outstanding Newsletter” 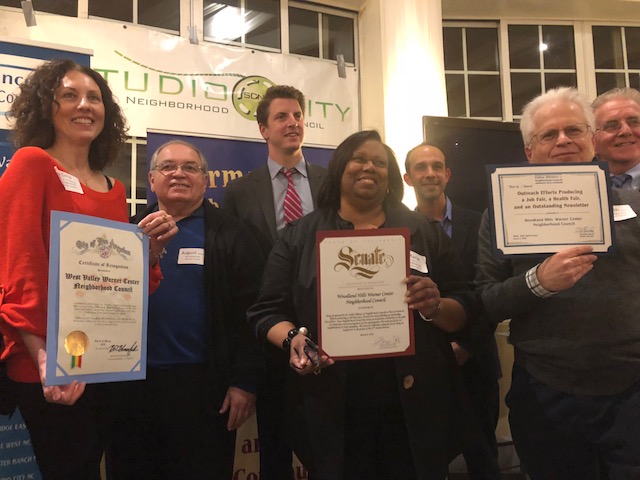 The event consisted of over a dozen employers from local businesses, apprenticeship programs, and continuing education opportunities within the community, who interviewed the attendees.  A reception team of Woodland Hills Warner Center Neighborhood Council members gave attendees an overview of the relevant information and directed them to the available rack of professional attire, men’s and women’s, all sizes and styles.

Each employer interviewed after the event expressed great results and yielded many follow-up interviews. Attendees expressed gratitude for the variety of flexible jobs with specialized training provided and apprenticeship opportunities in particular. The nearly 200 attendees and many employers expressed appreciation for the opportunities this event provided.

In consideration of the uncertainty surrounding the individual medical insurance market, and to support public health, the Board of the Woodland Hills Warner Center Neighborhood Council unanimously approved the Public Safety Committee’s request to provide a Public Health and Education Forum to provide stakeholders with important, unbiased, information on medical insurance, including choosing a plan, Obamacare, individual insurance and Medicare.

There were also medical screenings, information on the Flu, Blood pressure control, Hepatitis and Diabetes. The event was planned and staged in three months. Over 100 stakeholders attended.

The Neighborhood Council wrote and produced 41,000 printed newsletters which were sent out to every residential and business address within Woodland Hills. The 2017 distribution increased by 2,200 printed copies over 2016 due to growth within the community. Their newsletter is also posted online as a downloaded PDF.

The newsletter was edited and designed by a special ad-hoc committee. Committee chairs from the council’s ten committees submitted statements and supporting materials to the committee which was responsible for the final editing and layout. 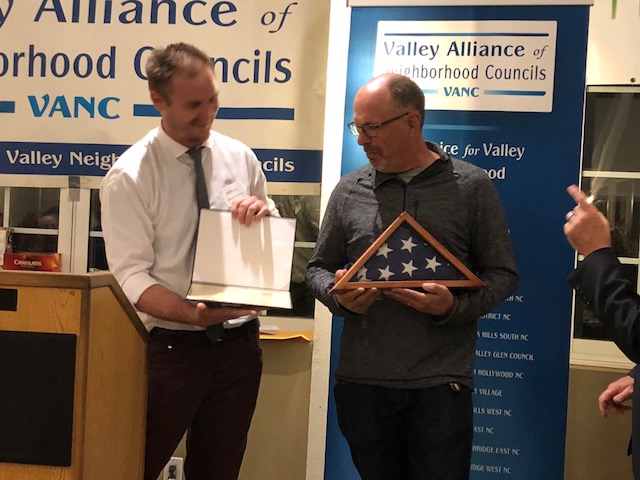 In addition to the awards presented by VANC, Congressman Brad Sherman’s office recognized Michael Binkow of Sherman Oaks Neighborhood Council for his work doing Outstanding Outreach and Service for the Homeless.