Since 2019, the Department of Neighborhood Empowerment has considered data as an asset for community efforts and therefore developed useful resources and tools to help community leaders in their advocacy strategy and their decision-making process. Below, you will find maps, applications, dashboards and others links that will help you better understand the different facets of your community.

“Without data you are just another person with an opinion.”

The Department created an application to help you identify to which neighborhood council belongs a specific address. It will also provide you information regarding the city district it belongs to.

On June 19, 2020, Mayor Eric Garcetti signed executive order No. 27 calling for Racial Equity in City Government. The Order supports efforts to ensure fairness, diversity, equal opportunity, and transparency in City government. The Department of Neighborhood Empowerment responded by administering a survey of Neighborhood Council board members to poll their views of social and economic disparities in the communities they serve. The survey was distributed online between July 6, 2020 and July 13, 2020 to the emails of record with the Department. The survey was available in English, Spanish, Chinese, and Korean. At the time the survey was administered, Neighborhood Councils were represented by over 1,600 locally elected board members. In this report, we share highlights of the responses to the eight survey questions, three of which specifically asked respondents about possible social and economic disparity initiatives the City might consider. These initiatives were assembled into seven broad categories. A separate report on the tabulated responses to questions related to how the City might carry out these initiatives will be available in the future.

The following dashboard will help you to know your community better. Various information related to gender, age, language spoken, Race, housing, income & Poverty and Education are provided within this dashboard.

Similar information is gathered on a one pager available to download. Select your neighborhood council from the folder below to download the one pager.

The map below helps identify the different assets of a neighborhood council. The assets listed today as of today are: Police and Fire station, Parks and Gardens, Farmer’s Market, Schools and Library. Don’t hesitate to click within a neighborhood council to see the list of assets or to click on a specific asset to have more detailed information about it.

The U.S. Census Bureau strongly encourages everyone to complete the 2020 questionnaire online. However, many L.A. County residents don’t have regular access to the internet. To bridge that gap, Census Action Kiosk (CAK) have been created. A CAK is a space with a computer or tablet and internet access where people can fill out the census questionnaire. The Map below shows the locations of these CAKs within the City of Los Angeles, the boundaries of the 99 neighborhood councils and also the Hard-To-Count census tract where energy has been concentrated to count every one.

In 2020, the voting experience will change. Among these changes, Angelenos will now vote in voting centers and not in the precinct they were used to go to. As the voting period is extended to 11 days and that voters can cast their ballot in any of the 1000 voting centers of the county, we created a tool to help people identify the closest voting center from their home, work or park.

Neighborhood Councils are invited to give a voice to their community by filing Community Impact Statement (CIS). CISes can be sent to a commission or attached to a council file and express the support or the opposition of the community on specific matters. Find below a dashboard of the CISes files during the fiscal years 2018-19 & 2019-20 by the 99 neighborhood councils: 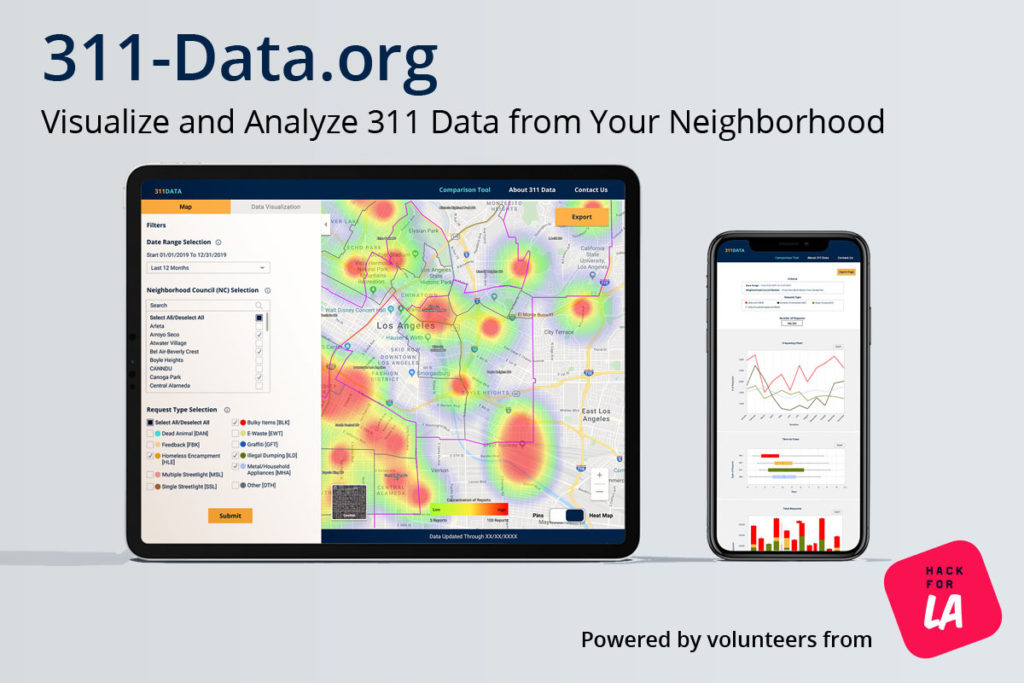 Have you ever wondered how fast 311 requests are closed in your neighborhood compared with another? How does your Neighborhood fare within your City Council District? Or maybe you just want to explore how many other requests were reported in the last week around your area. Start exploring with Hack for LA’s 311-data tool today!

May 2019 – Hack for LA started working with the Los Angeles Department of Neighborhood Empowerment and a pilot group of Neighborhood Council members to create an application that helps improve understanding and ease of use of 311 data at the Neighborhood level, using Mayor Eric Garcetti’s open data portal. After three workshops, over 56 Hack for LA volunteers, and a year later, the 1st version is now live.

The GeoHub’s purpose is to unlock City’s Geodata: Anyone can use open data from the City of Los Angeles Innovation Hub at no cost. Download raw data and share your insights with your community or build new applications that serve specific users.

The City of Los Angeles offers you the possibility to create an account on the GeoHub and have access to a powerful GIS tool to create your own map. Once your account is created, you will be able to add, join, enrich and filter layers and also to use Living Atlas, and create Community Survey and Webapps. Create an account here

Sharing Data with the public increases transparency, accountability and customer service. Use the data available to understand more deeply how the city works.

How much do you know about the LA city budget? find out at: http://openbudget.lacity.org